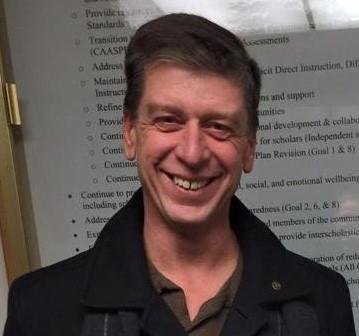 Dean Nordby is North Tahoe High School graduate of 1984. He received his Bachelor's of Arts degree in music from California Lutheran University in 1988 and his teaching credential from Cal. Lutheran in 1989. Dean's clear credential was awarded to him from California State University, Sacramento and he is currently working on his Masters of Arts in Education from Humphreys University and he will graduate in June 2019.

Dean Nordby is married to Elizabeth (Beth) Nordby and has two children. Dean has been working in the Tahoe Truckee Unified School District for 28+ years as a music director. He believes he has the greatest job in the world where the students elect to be there and their efforts have earned North Tahoe High School tremendous accolades. NTHS Music is viewed as a crown jewel in our community and the school itself makes it hard to want to work any place else.

Mr. Nordby enjoys family time, hunting, fishing and outdoor events. He is the Interact liaison for the Tahoe City Rotary, current Past-President for the Northern California Band and Choir Directors Association and has served on the California Music Directors Association State Board. He is an honorary Paul Harris Award Winner through the Rotary for community service and has earned awards within the state for music education.